What Do You Call It 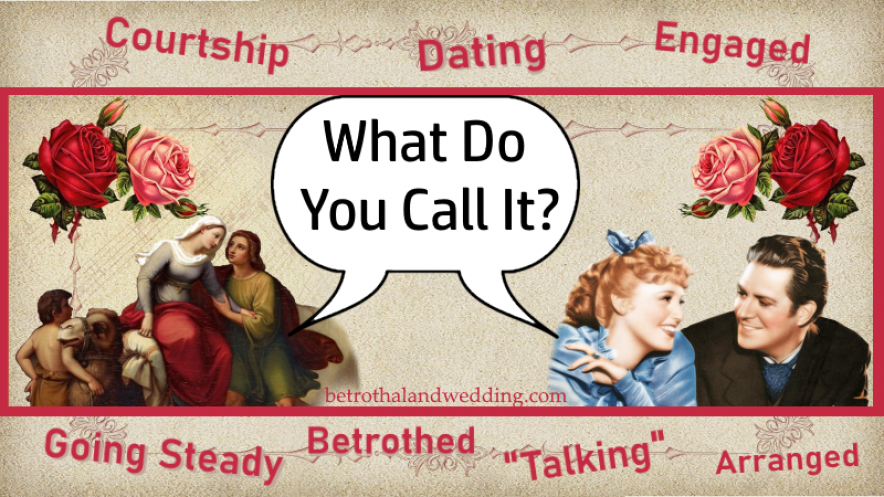 “Dating, courting, betrothal or arranged marriage can all work out, as long as scriptural principles (such as holiness, purity, and not defrauding one another) are followed.”

We’ve been told this by many different people and in essence we agree because it doesn’t matter what it’s called so long as what’s being done is righteous. Now, when the scriptural principles are being followed we would call that the “betrothal” approach. If you prefer a different label for a scriptural approach to marriage, contact us and let us know what you call it!

A danger to avoid when communicating about approaches to marriage is assuming that your listeners have the same definition of the labels that you do. To aid in understanding, here is how we define each label.

The early stage involves a single man and woman purposefully arranging opportunities to talk and spend time together with a hope that they will find out that they are a good fit for marriage. If they determine there is real potential, they will become a couple and start exclusively dating. They are then considered to be in a relationship that has a possibility of ending in marriage.

Input from parents/mentors can be sought, but is not considered a requirement. If the couple determines marriage is right for them, the next step is engagement, promising to marry in the future.  The engaged couple typically spend a few months to a year planning their future life together. They will make their marriage covenant at the wedding itself.

The single man will typically ask permission to “court” a woman. Parental approval is usually, but not always, required.
“Courting” involves talking and spending time together, the purpose being to determine whether or not they should marry. Courting people are considered to be in an exclusive relationship that’s likely, but not guaranteed, to end in marriage.
When together, the couple is usually chaperoned. If they decide they should marry, the next step is engagement, promising to marry in the future.  The engaged couple typically spend a few months to a year planning their future life together. They will make their marriage covenant at the wedding itself.

Betrothal
The single man typically determines through prayer and advice from parents/mentors who he should seek in marriage. Permission from the woman’s father (if she has one) is considered a requirement. If the father and then daughter agree, the single man and woman will make a marriage covenant right away instead of waiting until their wedding day like dating and courting couples do. They are then a permanent couple, barring divorce. The betrothed couple will typically spend a few months to a year building their relationship and planning their wedding celebration and future together.

Arranged Marriage
The parents/mentors of the single man and woman take care of all preliminary steps, sometimes engaging the help of professionals to find a spouse for their son/daughter. Input from the singles may or may not be sought. Once all parties are in agreement the singles either become an engaged or betrothed couple. Contact with each other before the wedding day can be minimal or non-existent. Because of that, arranged couples primarily build their relationship after being fully married.

If you’ve read this far you’ve probably realized that there’s a lot of variety in couples' approaches to marriage, whatever label they choose. We’d like to point out which practices we think are NOT in accordance with scriptural principles. This is not to cast blame on anyone who has practiced them but to lovingly warn people away from future mistakes. None of us have walked perfectly but we should do our best to please our Heavenly Father going forward.

It’s typical in modern, Western culture for a single man to lay claim to a single woman he is interested in, either by labeling her “my girlfriend” or by saying they are “in a courtship.” Other men are to steer clear and are not permitted to have the same sort of access to her time and affections as he is. Not only does this practice not make sense, (Why should a woman let a man reserve her without giving her a life-time guarantee of loyalty?) but it also does not match the Biblical injunction, “treat... the younger women as sisters, in all purity.” (1 Tit. 5:2) If a woman is not your wife, she is not yours. You shouldn’t act as though she is.

Particularly of concern is that people are often involved in a chain of exclusive relationships which is far outside the design ideal of one man and one woman.

Not gaining approval from the woman’s father

There is a reason the old marriage ceremony includes having the bride’s father “give her away.” The Bible says that a daughter’s vow can be annulled by her father (Num. 30) and he can refuse to give her in marriage, even if she and the man have been intimate (Exo. 22:16-17.) Over and over in the Bible, a suitor will seek the bride’s hand by talking to her father and the scripture describes marriage as fathers “giving” their daughters. Yet modern Christians seem to think a father’s involvement is optional. Sometimes the excuse given is that the father is not a believer, but there are no qualifiers in the scripture for a father’s authority. If a father is an unbeliever, that is not a good reason for the daughter and/or suitor to act like one too by ignoring the Biblical model.

Making a decision without waiting on God
The method for determining who to marry is where we see a lot of principles being ignored. Most people are told that an extensive evaluation period is necessary for determining whether or not to marry. Many think it’s imperative to find out, through experiencing it, if they are romantically compatible and will “fall in love” before they will commit. Some have a gamut of qualifiers that they will use to eliminate potential spouses or will turn down qualified believers because they aren’t initially attracted to them. All of this evaluating, attachment building, and trying-out ignores the obvious, that a marriage decision, like everything else, needs to be submitted to God. It doesn’t matter how compatible two people are or what wonderful traits they find in each other if God doesn’t want them to marry! So leaning on our own judgement or feelings is not scriptural. We ought rather to inquire of YHWH.

Some people do not believe God would give them a yes or no about a marriage decision but many, many couples testify that He has, so you will have to decide if those couples are delusional, liars, special cases or... if maybe you too could receive a yes or no if you ask.

Please contact us through our contact page if you have any questions or other feedback. You can also send us a message on our Facebook page "Betrothal Guys."