What do I mean by Betrothal? 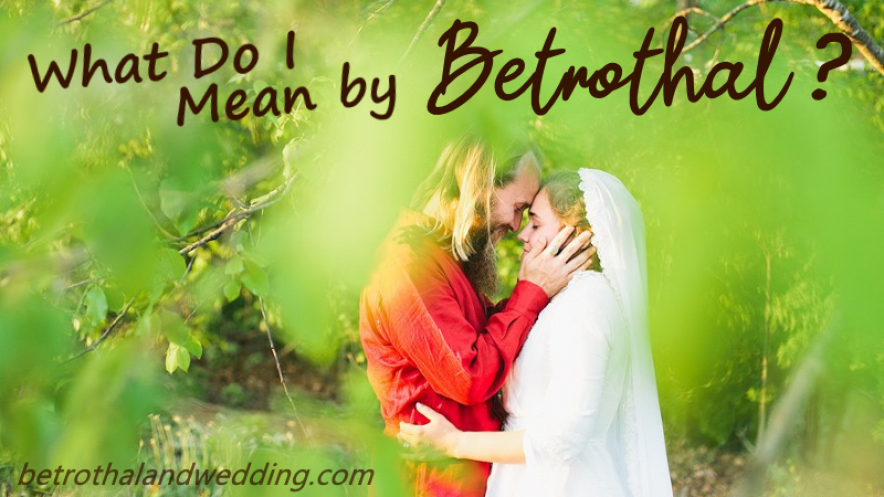 This is an email from a betrothal-minded young man to the father of the woman he had asked to marry.

What Do I Mean By "Betrothal?"

I believe that a betrothal commitment is the point at which a marriage covenant is made and that the two parties are considered husband and wife from that point. I believe that the scripture teaches that a betrothal is only dissolvable via a divorce and that such a divorce is only allowed "for the cause of fornication." Basically I would see betrothal as the period during which final preparations for starting a new household are made as well as a time for spiritual unification and emotional bonding to take place.

I have not asked to “court” or for a "courtship" because I usually think of courtship as being a form of experimental dating that is family-friendly and less roulette style.  What I would like to do instead, is in the following outline. A description of how I see a mostly "ideal" approach towards betrothal and marriage might look.

I don't see that Scripture gives us an exact recipe for how to approach this type of situation. Only the principals of what I will lay out in my "ideal scenario" outline do I find solidly backed up by the scripture, so I don't want to be so set on an exact idea, that I might refuse alternatives that also fit with the principles of Scripture. For obvious reasons, I've mostly studied and thought about this from the man's point of view and what his responsibility would be.

To start with, I think that the action should be initiated by the man with his parents being in agreement, as this best represents the picture of Yahshua (in unity with His Father) being the initiator in reaching out to us as His bride. I think that the man should have the full consent and blessing of his parents before speaking, both as a matter of honoring them as well as to receive wise counsel. I also believe that he should be convinced that he is within Yahweh's will and be fully committed to proceeding all the way to marriage unless receiving a "No" answer, so that there is no danger of the woman being hurt by the man turning back in the middle of the process. (I could see a case being made for an "I'm interested but not fully committed" approach in some situations, but for myself I see that as opening up danger of hurting the woman.)

Once these things are in order, the man should approach the father of the woman, not the woman herself. I believe this because the father is appointed by Yahweh as the protector of his unmarried daughter and to attempt to bypass or downplay the protector would be the act of a thief, not an honest man. From this point, it seems to me that as protector, the woman's father would be the one to either veto the whole idea or set the ground rules for continuing.

So, trying to imagine myself in the position of a father. If I thought the man who had approached me was a possibility, I would want to talk to my wife about it and pray about it. If we were comfortable with the idea of it going all the way to marriage, I would probably then talk to my daughter and encourage her to be fully convinced of Yahweh's will before giving an answer. If she felt that she did not really even know the man, I would encourage her to start observing his commitment to Yahweh, his character and personality, but would advise that the "getting to know each other" stage be pretty limited beyond these basics to avoid attachments forming which could make it difficult to hear clearly from Yahweh.

Once all parties are in agreement that marriage between the man and woman is within Yahweh's will, I think a commitment or betrothal ceremony should take place as soon as possible so that the relationship can be allowed to progress without the need for strictly guarded hearts. I think the length of the betrothal would depend on the amount of time that would reasonably be needed for preparations as well as for the man and woman learn about each other and bond spiritually and emotionally.

These are my ideas and I guess the main difference between what I have laid out and what I understand the definition of courtship to be, is that I think the bulk of the serious "getting to know each other" would best take place after the commitment, while I think it generally takes place before the commitment in a "courtship."

Hopefully this helps you to understand where I am coming from and as I stated in my outline, I believe that you, as her father, are in the position of deciding what the ground rules should be from here. I can see that there is danger of a daughter being hurt on both sides of the issue. Either in allowing too much of a relationship to form before a commitment or in making a commitment without knowing enough about the man to make the right decision. I am open to whatever approach you want to take on this although there are three areas where I probably could not conscientiously go.

First, I would like to keep everything as "stealthy" as possible so that it would take a keen outside observer to ascertain who the two principal parties are even if they do become convinced that something is going on between the families. As you said, it is true that siblings may eventually guess what is going on, but I would like to keep it as quiet as possible, so that in case you or your daughter come to the conclusion that this is not Yahweh's will, there is as little fallout as possible.

Second, as I said when we talked, I do not want to be put into a position where I am trying to form an attachment in your daughter towards me. To spend time with her and let her see who I am, I am fine with, but I would prefer to do this in small group settings and also like the idea of keeping a pretense of normality in most circumstances.

Third, I want to be sure that I do not allow myself to become emotionally attached before a commitment. To this end, I may eventually need to place limits on time and situations for my own sake. I have never given my heart to a woman, and if the answer in this situation ends up being a "No," I want to be able to say this just as honestly at that point as I can now.

I am fully persuaded that Yahweh has shown me that I am to go forward with this. So, to answer your question on what it is that I want to do. I want to do what is necessary to receive a final answer from you and your daughter on the question, "Do you believe that a commitment to marriage would be Yahweh's will and are you willing to proceed with it?" while in the process staying within the dictates of my convictions and within the guidelines that you choose to lay out.

I hope that this helps you get a clearer picture of where I am coming from and what my ideas are in this. If you have any questions to clarify anything here or on other topics I am happy to answer them.

To find out how Joshua’s pre-betrothal relationship worked out, read his testimony.