No Fear in Love 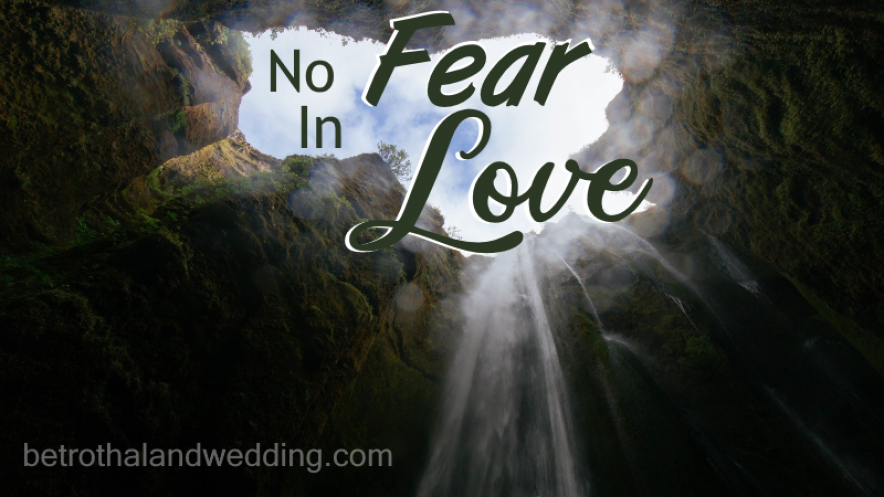 "There is no fear in love, but perfect love casts out fear. For fear has to do with punishment, and whoever fears has not been perfected in love. We love because he first loved us."

Our Savior loved us and died for us and we no longer have to be afraid of punishment. That knowledge brings wonderful feelings! If only people could have that kind of reassurance in their earthly relationships.  One reason Americans hesitate to sign marriage papers is their fear of divorce. They don't want to jump into something as deep as a marriage relationship only to have it all fall apart! Many men have experienced being left, (essentially punished) by their girlfriend when she decided she could no longer put up with his shortcomings. Many women have had their suitor withdraw his interest when he discovered she had more problems than he was willing to deal with. They did not experience "perfect love." They wonder, "If I got married, would my spouse eventually leave me, too?"

Fear of the Unknown

But it's not only the consequences from their own failings people fear when it comes to marriage! After I found out my now husband had asked for me I wasted quite a bit of brain power in the following month running through possible developments if I married him.

"What if he becomes a drunkard later in life?"

"What if he wakes up one morning positive that we have to be missionaries in a mud hut in Africa?"

"What if he abandons the faith?"

"What if he gets a permanent injury, leaving me to take care of him and our children for the rest of my life?" 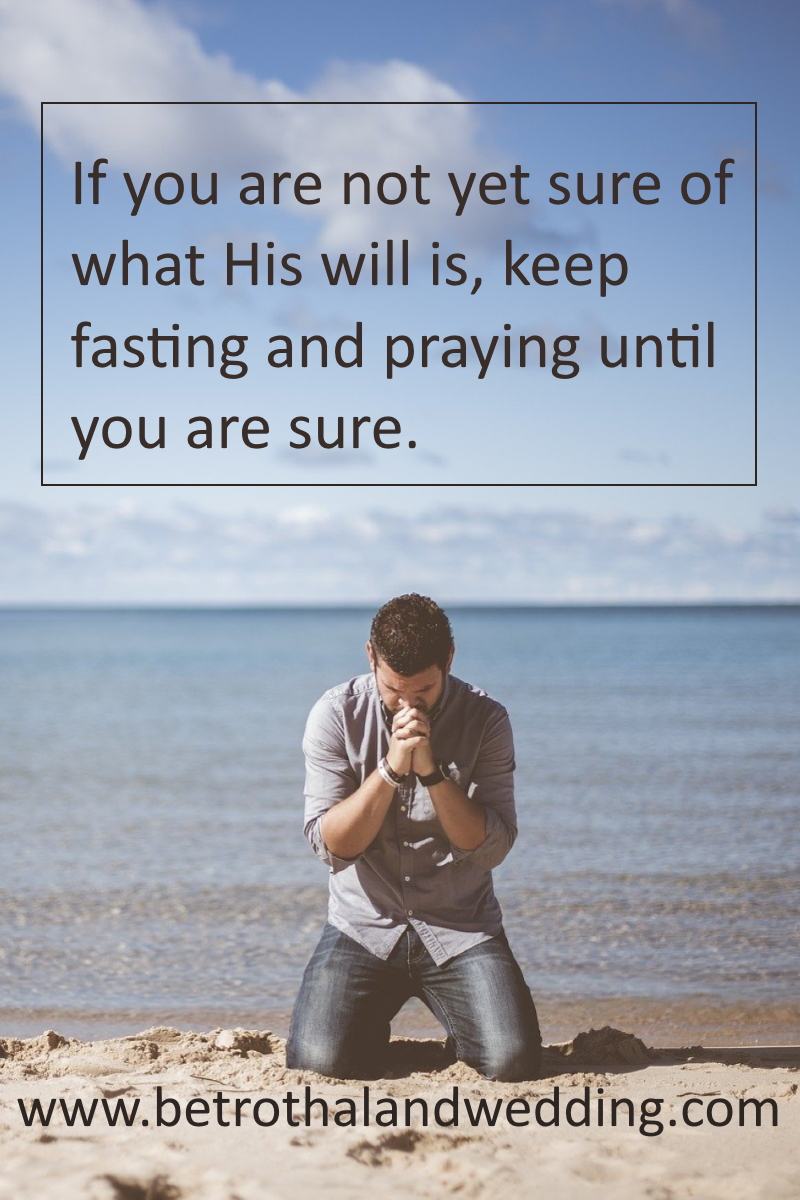 Most concerns I came up with held little real probability because Joshua's life had every appearance of being on a good trajectory. But I knew that the future is rarely as rosy as we picture and is certainly unpredictable! How could I get up enough nerve to take the leap, faced with so many unknowns? Really, what with all that I already knew about Joshua, I had little to fear compared to the Biblical Rebekah! Remember how in the famous story in Genesis 24 she rode off into the wilderness to marry Isaac whom she had never met? Did she sleep at all the night before she left?

To take such a leap requires either a certain fool-hardiness or great trust in God. One of the reasons it took me a long time to consider Joshua's offer is that I had neither. I knew that marriage would certainly be hard work in one way or another and, oh, how I dislike hardship! I trusted God to take care of me, but I also knew His care does not always spare us from pain.

Realization hit me that staying single would not secure me from difficulty, either! God teaches us through hardship. Why would he keep me from it, even if I chose to remain single? Besides, if I really want to be used by Him, shouldn't I let Him decide what shape that would take?

Some potential matches have problems that are readily apparent. Debts, disabilities, criminal records and the like. Sometimes, a person can already know they are signing up for hardship if they say “yes” to the marriage. They wonder if they are really equipped to handle the struggle. They wonder “should I wait for something better?”

Getting up the Nerve 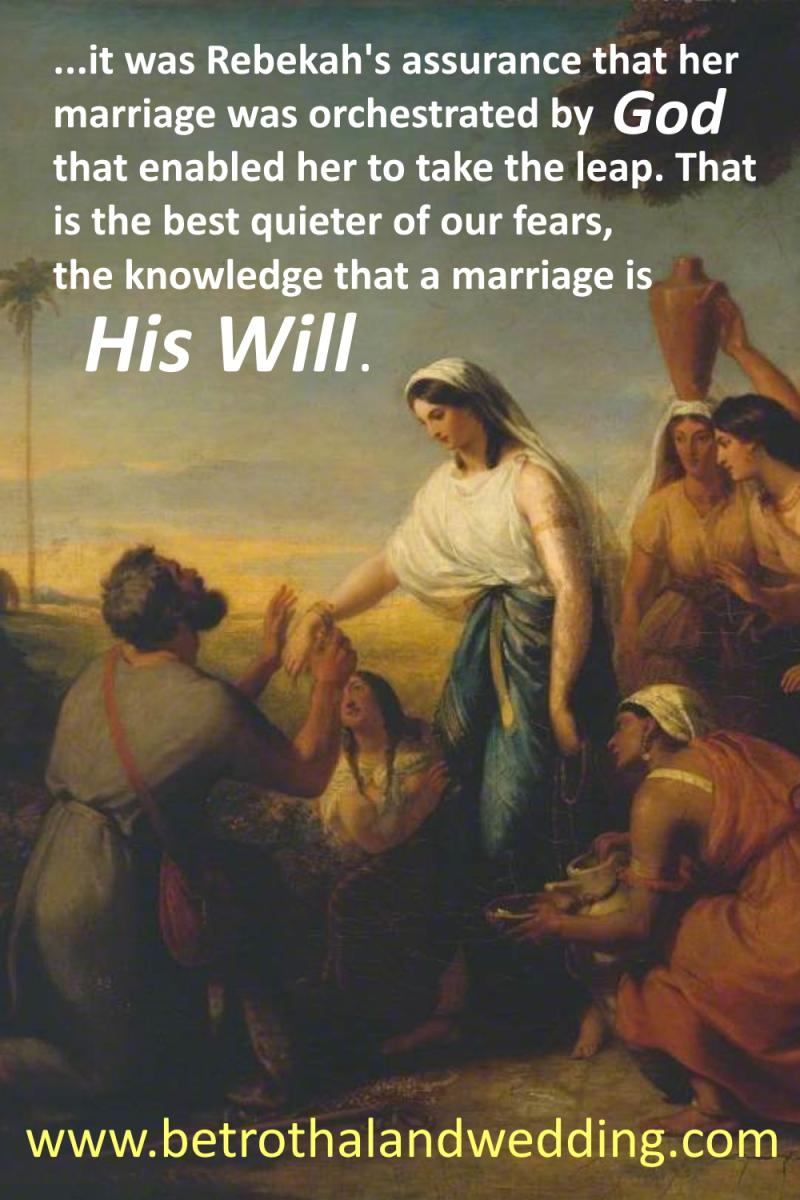 Most people in our culture who did commit to marriage, despite it's knowns and unknowns, were enabled by their attachment to each other.  They were so in love that they would rather take the risks than live without the other.

Those of us who want to make a commitment to marriage before falling in love have to take a different approach.  We must be so in love with Yeshua that we will take up our cross and follow Him wherever He leads. (Mark 8:34) Even into a marriage full of unknowns! Even into a marriage that has the risk of future rejection. Yeshua loved us while we were still sinners. He, at least, will never leave us. We can trust our lives to Him.

I believe it was Rebekah's assurance that her marriage was orchestrated by God that enabled her to take the leap. That is the best quieter of our fears, the knowledge that a marriage is His will.  Fear cannot drive our decisions. We can't let fear keep us from saying "yes" to a marriage, (unless it's the fear of marrying in rebellion to God's will.) On the other hand we can not choose to marry out of fear of being left single!

Are you considering a marriage candidate? If this marriage is God's will, pray for His peace and that He'll free you from fear so that you can go whole-heartedly where He is sending you! If it's NOT His will, then don't even toy with the idea of moving forward! If you are not yet sure of what His will is, keep fasting and praying until you are sure.

The popular route to take when unsure of a marriage prospect is to spend more time together. This increases comfort levels as familiarity grows but, unfortunately, even if they find no problems with the other person and feel completely compatible, they still have no assurance that they should marry.  In fact, they may get invested in a lengthy relationship which they will be reluctant to end when they DO hear from God! That is why even though it may be tempting to engage in an evaluation period, we advise imitating Abraham’s servant and seeking answers from God, not through "leaning on your own understanding." (Proverbs 3:5-6)

“Instead, seek [God’s] kingdom, and these things will be added to you.  Fear not, little flock, for it is your Father’s good pleasure to give you the kingdom.”