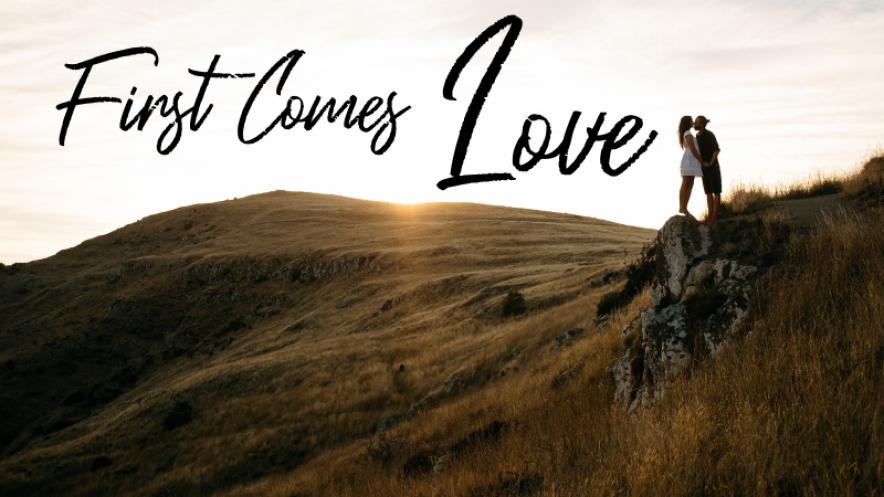 The idea of betrothal with its goal of going straight from "friends" to "covenant" and skipping of the in between relationship leaves some Christians a bit freaked out.

"Shouldn't you get to know each other better, first?"

"How do you know that you're really compatible?"

And one young lady's comment, "I could never get betrothed to someone I didn't love."

As a woman who did skip the in between "courtship" or "dating" relationship, I thought I would try to explain the reasons why and how it felt for me.

First to explain my background.  No, my family is not of Middle Eastern descent, so betrothal was not in any way our "culture."  We were pretty standard Americans of Scottish ancestry, went to the Methodist church, played baseball, watched movies, etcetera.  After we started homeschooling and then trying to follow the Bible more literally, (keeping the Sabbath on Saturday, etc.) we were no longer "normal Americans."

Like a lot of homeschoolers back in the day I grew up being used to questioning the status quo and appearing "odd."  That's probably why my initial reaction to the notion of modern Christians practicing betrothal was not repugnance. I gave it a fair chance in my mind. I knew that a lot of people throughout time had married that way.  It seemed like it could have certain advantages over other "techniques."  But I didn't expect to get married myself anytime soon, so I didn't try to weigh all the pros and cons until later. You can read more on how I ended up getting betrothed in our testimony.

It's understandable to be concerned about the wisdom of people jumping right from "hi" to matrimony and agreeing to marry someone they don't really know. In my experience, when a person is thinking negatively of betrothal, often it's because they are picturing an arranged marriage between two rather unwilling strangers.

The reality is that there are a variety of backstories to betrothed couples just like for dating ones. Some have known each other since they were children. Some were already such close friends that having a courtship stage in order to "get to know each other" would be unnecessary. In my own case I did not have a close friendship with my betrothed beforehand so perhaps I didn't really "know him" according to some standards but I did know a lot about Him.

We'll delve more into the topic of getting to know someone in a future post. For now, I want to focus on the concerns like those of that young lady and her unwillingness to agree to marry a person she didn't love. 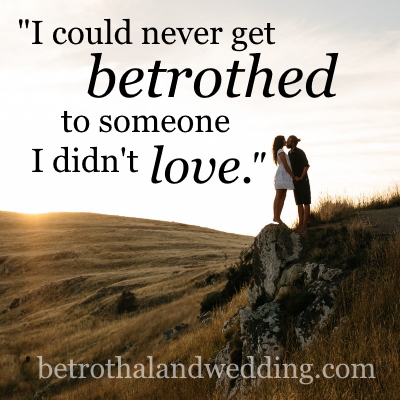 Most Christians have been taught about the different types of love seen in the Bible like sacrificial love, "agape" in John 13:35. "By this shall all men know that ye are my disciples, if ye have love one to another."  And loyal, friendly love, "Philia." "Be kindly affectioned one to another with brotherly love; in honour preferring one another;" (Romans 12:10)  So in that respect I did love my husband before we got betrothed.  No, he didn't speed my heartbeat or spark butterflies, but I cared about him. I didn't have the "in love" feelings until a few days after we made the commitment. I went into the relationship not sure what it was to "fall in love." I wasn't sure if romantic love was something that would take a long time to grow.

I wondered if I wouldn't feel it until near the end of the betrothal and closer to the wedding day. I wondered if our feelings toward each other would turn out to be more of a deep friendship, like a brother and sister. I didn't have to wonder long because, like I said, the butterflies and fireworks and constant goofy smiling happened very fast after we agreed to the union. In some ways it felt like once I relaxed and thought, "it's ok to like him, in fact, I should try to love him," it just opened the floodgates!

It was the same for him, he says. To us, making a commitment actually facilitated the falling in love. Because of our personal goal to stay unattached until we were sure of we were going to marry, we were resisting forming a close relationship. So, the only way to push our feelings to the "in-love" state was by making the covenant and giving ourselves the permission to have those feelings. "I charge you, O ye daughters of Jerusalem, by the roes, and by the hinds of the field, that ye stir not up, nor awake my love, till he please." Song of Solomon 2:7

I'm not saying that we couldn't have fallen in love without the commitment, but, because we didn't feel like that would be appropriate, we would have kept resisting it. The way we look at relationships, it's perfectly natural for a person to feel butterflies over someone else, but if they aren't married to that person is it fine to just let those feelings go unchecked? To us that didn't seem wise or fitting.  ". . .The elder women as mothers; the younger as sisters, with all purity." 1 Timothy 5:2

So, to the young lady who can't see herself agreeing to marry a man she didn't love, please talk to Christians couples who've been long married.  They'll tell you that the delightful and romantic "in love" feelings are very nice, but not a constant feature of a relationship. For most couples the intense sparks of romance sort of burn down into warm, steady coals.

If, by some chance, you never got to feel the butterflies and your marriage always was just a sweet, calm, affection would you feel like you were cheated? Marriage has so much more depth and meaning and various feelings to offer than you can imagine. Most of the "love" types of feeling can come and go based on our actions and attitudes. Let's make commitment the requirement for being in love. Not the other way around.