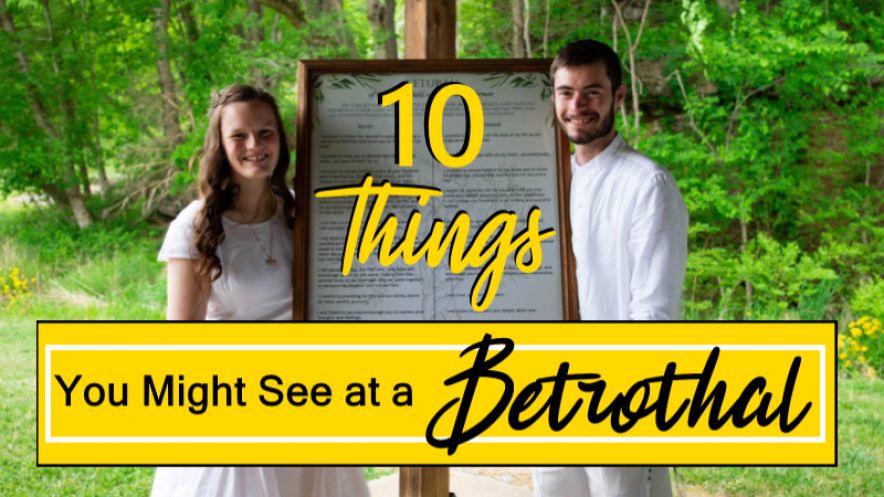 The definition of “ceremony” is, “a formal act or series of acts prescribed by ritual, protocol, or convention.*” We see this exemplified in weddings where people usually perform a traditional series of actions. Even though the Bible doesn’t prescribe a marriage ceremony, having customary elements when two people are getting married serves to help people recognize what is happening. The white dress, marching down the aisle, and exchanging rings are western customs that enforce the idea in the minds of the participants that something significant is happening.

For this reason, when a man and a woman make a marriage covenant, (get betrothed) some sort of ceremony or demonstration is useful, not only to impress on their own minds the gravity of the commitment they are entering, but also to make a memorable moment for family and other witnesses.  They will then be able to acknowledge and later remember and attest to a betrothal having taken place. While engagement has its own set of customs, betrothal is more serious than engagement, so what takes place at a betrothal ceremony is usually more akin to what happens in a wedding ceremony. It makes sense because the “I do” part of a modern wedding is, in fact, a marriage covenant or “betrothal.”

We have attended around eight betrothal ceremonies, (plus experiencing our own) so we thought it might be useful to give a run-down of what often takes place for those who haven’t had the blessing of seeing one themselves. In addition we’ll include our opinions about which practices we recommend and why.

The bridegroom gives something of value or meaning to the bride’s father, (or sometimes to the bride.) This practice is something specifically mentioned in scripture connected to betrothal so, even though in western culture the brideprice has been abandoned in favor of simply giving a ring, we think giving a brideprice should feature at betrothal ceremonies in one form or another.
Relevant scriptures: Gen. 34:12, Exo. 22:17, Josh. 15:16, 2 Sam. 3:14

The bridegroom offers a cup of wine to the bride. She drinks from it and then he drinks from it. This gesture is found in Christian records at least as old as the 16th century C.E. In ancient Mesopotamia even further back there are records of a cup of beer featuring in betrothal ceremonies. The significance of the gesture is that the man is offering, and the woman is accepting, marriage. It seems to be in imitation of when Yeshua gave his disciples a cup. “Likewise He also took the cup after supper, saying, “This cup is the new covenant in My blood, which is shed for you.” - Luke 22:20, NKJV
Relevant scriptures: Song. 2:4, Matt. 20:22, Matt. 26:29, 1 Cor. 11:25

The bridegroom and bride each take a seperate container of salt and pour it into a single container. It is meant to show that their union is as impossible to separate as the impossibility of separating the combined salt. A reason to include it in a betrothal is the mention of salt in relation to covenants in the Bible and the relevance of betrothal being a covenant.

We like the idea of including a salt covenant, but not so much the way it’s usually done. Salt’s usage, historically, to show partnership between people was that it was eaten. In the scripture it is sprinkled on sacrifices which were described as being consumed by God. So, we believe a more appropriate use of salt in a betrothal would be for the couple to dip bread in it and eat together which also serves as yet another reminder of Yeshua’s meal with His disciples.
Relevant scriptures: Lev. 2:13, Num. 18:19, 2 Chr. 13:5, Matt. 5:13, Luke 22:19

The bride puts on a headcovering, sometimes given to her by the bridegroom. This is in imitation of Rebekah when she saw Isaac and to demonstrate the new wife status of the bride. Putting on a special veil works well to demonstrate that the woman is now a wife since wedding veils are still utilized in our culture. It is also appropriate at the betrothal since that is the point at which a woman enters the headship of her husband instead of being under the authority of her father.
Relevant scriptures: Gen. 24:65, Num. 30:3-15, 1 Cor. 11:2-16

The bridegroom gives the bride a ring or the couple exchanges rings with one another. Rings have been traditionally used to symbolize a marriage covenant for centuries. No one knows when or where they were first used. Since exchanging rings has been a long-standing part of a traditional wedding, giving them at Betrothal makes sense since the couple are, by virtue of covenant, husband and wife.  Wearing rings is a culturally understood symbol of that “spouse” status. Bible references show a possibility that a nose ring may have been the tradition instead of a finger ring, originally.
Relevant scriptures: Gen. 24:47, Eze. 16:12

The bride’s parents speak a blessing over the woman and the man’s parents over the groom. This seems very appropriate as the single people are entering a new relationship and will be learning to be husband and wife. In the Bible Rebekah is blessed by her family before she leaves to become Isaac’s wife. We also believe it a good idea and a beautiful addition to have the couple blessed again, as a couple, at the wedding.
Relevant scriptures: Gen. 5:2, Gen. 24:60, Gen. 28:1-4, Gen. 31:55, Ruth 1:9, Ruth 3:10, Luke 24:50

A written document describing the terms and/or goals of the marriage covenant. This is an old tradition in Judaism and is considered so important by them that a couple is not permitted to live together if they lose their ketubah! The Bible does not specify that a marriage covenant must be written rather than just spoken, but it is in our opinion a good idea for several reasons. 1. It serves as a testimony of what was spoken and committed to.  2. It is useful as a legal document, especially if it includes signatures.
Relevant scriptures: Exo. 34:27, Deut. 4:13, Deut. 24:1, Neh. 9:38, Mal. 2:14

The bridegroom washes the bride’s feet and sometimes the bride washes the bridegroom’s. This is to picture how the couple will serve and care for each other. The bridegroom also demonstrates his role as husband by imitating the actions of Yeshua. It is a touching practice but can feel awkward for couples who are not ready for that level of physical contact. Also because the moment feels so intimate it can be uncomfortable for guests to watch. For this reason some couples may find they would rather wait until the wedding or even the “honeymoon” to wash each other’s feet.
Relevant scriptures: John 13:5, Luke 7:38, Eph. 5:25, 1 Tim. 5:10

The bridegroom and bride stand under a canopy called a “chuppah” like what is done in a traditional Jewish wedding. Like wedding rings, the “chuppah” is so old it’s difficult to know when and where it originated. Also, like the rings, it certainly says, “marriage” to onlookers to have the couple standing together in a special, designated area. If the “chuppah” is meant to symbolize a tent where a couple dwells together, though, it would seem more appropriate to utilize the “chuppah” at the wedding feast.
Relevant scriptures: Gen. 24:67, Joel 2:16, Psa. 19:5

The bride walks around the bridegroom, usually 3-7 times. This is an old tradition seen in Jewish weddings and similar customs are found in wedding rituals of other religions. What sources say it’s meant to symbolize vary widely. If a couple’s family was Jewish this tradition might be useful to show them that they are becoming husband and wife but it has little meaning to those outside of Judaism.

And that's the 10 things you might see at a betrothal! We hope this guide will be useful to many as they enter into betrothal and celebrate the many ways it pictures our relationship with Yeshua!

Joshua and Leila got betrothed and married in 2012. They now spend their time advising and encouraging singles and raising their 5 children.